skip to main | skip to sidebar

My doctor's office is right on the waterfront, which is one of my favorite places in the town that I grew up in. I live in the next city over now, and I don't go back nearly as often as I'd like to. I got to my doctor's office half an hour early (completely over-estimated how bad traffic might be), which gave me an opportunity to take a leisurely stroll along the beach. Unfortunately, I didn't take my camera, but I did grab a screen capture off of the web cam from the restaurant next door to the clinic. It doesn't do it complete justice, but you can get the idea. 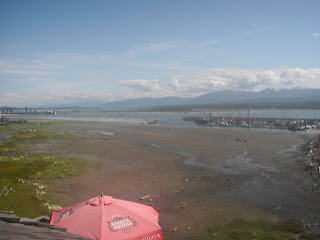 The walk was a great chance to wind down and relax before my appointment. I wandered down there for a few minutes, but I burn easily and I wasn't wearing sunscreen, so I decided to head up to the street and do some window shopping. I found M a great skirt to wear to a wedding we're going to in a couple of weeks, and as I was heading to the register I saw a lone "I'm a Big Sister" shirt hanging on a rack near the register. I looked at the tag, and it's M's size, so I decided to grab it. I'm having some buyer's remorse, because it almost seems like I'm inviting bad karma by buying it now, but hopefully she'll need it before she outgrows it.

They took me right in to an exam room when I got to the office. I did have to wait a bit because the two patients before me both went over, but I enjoyed the time reading all of the jokes in an old issue of Reader's Digest.

I've been struggling over what to call my doctor here, but after today I think I'll call him Dr. Wonderful. It was a great appointment, and I left feeling like we're a team in this. He listened to my ideas, explained things in great detail when I had questions, and was so optimistic that it wore right off on me.

We discussed why the Prometrium didn't work. Everything I had read online said that if it doesn't cause a withdrawal bleed, that is a sign of insufficient uterine lining. Since that has never been a problem for me, I was very confused. He explained that for some people, Prometrium seems to reset their hormones back to the beginning of a cycle without the bleed, which explains why this cycle went on for another 36 days past the Prometrium before *anything* happened.

He agrees that I have O'd, just based on my symptoms, and had the nurse book me in for an HSG next Wednesday (he's already got one that day, so it's easiest) assuming that I'll start bleeding Friday or Saturday. He said doing the HSG if I'm bleeding isn't a problem, and that even if I don't get AF until Monday or Tuesday he still wants to go ahead. Based on my usual LP, I don't think it'll be a problem.

Then we discussed what we're going to do after the HSG. He wanted me to started on BCP's after the HSG, to ensure a shorter cycle so that we can move on to Clomid right away. However, as soon as I told him that I have migraines with neurological side effects (numbing, visual disturbances, slurred speech) that are made worse and more frequent by BCP's, he said there was no way he wanted to put me through that.

At that point, he said that as unfortunate as it was, we might just have to wait for the HSG cycle to end on it's own, since Prometrium probably won't work for me. At that point, I asked if starting Metformin now would be a good idea, since it could shorten my cycles, and we could be waiting a few months for a new cycle anyway. He agreed, so that's the plan.

HSG on the 25th, Met starting tonight at 500mg, increasing to 500mg twice a day in one week, and then up to 850mg twice a day the week after that. As soon as a new cycle starts, we'll add Clomid at 50mg for 5 days, and see how I respond to that. He said as long as I tolerate the Met well, he'll keep me on that throughout treatment.

I had a good chuckle when we talked about Met side effects, because when he mentioned weight loss, he added that he would want to monitor my weight carefully since I'm "not overweight to begin with", and he wouldn't want me to lose "too much". I must hide it well, because I'm actually clinically overweight by 10 pounds, and over my "ideal" weight (based on BMI) by 30 pounds. I could lose 40 pounds comfortably. I highly doubt the Met would make me lose *that* much, so I think I'll be fine.

While I was waiting for my prescription, I wandered around Superstore (which I normally avoid, but you can't beat the prescription prices) for a while. Picked up a new shirt in a(n) (optimistic) size small (it fits, but will fit better if I lose a couple of pounds), the two HP movies that we don't already own (Philosopher's Stone and Goblet of Fire), and some new eyeliner. And then I went home and told R to take my bank card away, because I was on a spending spree (I also bought new cordless phones on Saturday) and needed to be stopped. At least until I put the claim in to my extended medical to get back what I paid for the Met. ;)
Posted by hammygirl at 16.7.07