skip to main | skip to sidebar

I'm am so flustered right now that I doubt that half of this post is going to make any sense, but I need to vent so here it is anyway!

I mentioned before that I had some milk supply issues, but they are under control. It had been a bit of a problem off and on, but for the last month and a half things have been a lot better. I've been doing all of the 'tricks' to ensure a good supply, including pumping between feeds, drinking (horrible tasting) milk boosting teas, 'super-switch' nursing, etc. all to make sure that my supply stays good. And it's worked very well.

The bad news is that LB isn't gaining well. And not only isn't he gaining well, but after a few weeks of 1-2 ounce gains, this week he lost 4 ounces. He's dropped from the 31st percentile for weight at birth to the 25th percentile at 2 1/2 months to the 5th percentile today. That's a huge drop!

So off to the doc we went. Not my regular doc, as she is on maternity leave, but another (apparently VERY old school) doctor in her clinic. Who despite my insistence that he is eating plenty and peeing and pooping like a champion, said that it sounds like a supply issue and that I should start him on rice cereal (!) and come back for another consult in two weeks. Now, I know there are a lot of people who start rice cereal early, but I am one of those people that goes with the recommendation of WHO, and the AAP, and Health Canada when they say solids should be delayed to at least six months. One of the nurses suggested another doc (a certified lactation consultant) for me to see, who happened to be working a walk-in clinic, so they called ahead and I rushed on over.

Only by the time I got there, the doc they had sent me to see had to leave, so I ended up seeing someone else. Who then told me that even though I *think* I have a good supply, I'm probably wrong (!), and I should supplement with formula and come back in a few days and see if that's helped.

So, then I headed off to the Health Unit, where I had a great little chat with a public health nurse who agreed with me that I seem to have a perfectly adequate supply and there is probably something else going on. She gave me a log to fill out - feeds, wet diapers, dirty diapers, behaviour - so that if he continues to lose/not gain I can take that to the doctor as 'proof' (based on his output) that his intake is in fact sufficient.

Both of the doctors did give him a fairly thorough physical checkup, and didn't find anything out of the ordinary, so that is good news but still not terribly reassuring.

I'm really really hoping that this is just a little hiccough in his growth, and that everything will sort out soon. He doesn't 'seem' ill at all. He's happy and active and just an all around wonderful little guy. But I'm scared. This whole thing just doesn't seem right, and I'm not sure what to do next. I'm of course going to fill out the feeding/peeing/pooping log, and go back to the Health Unit on Tuesday for a follow-up. I just don't know if there is something more I should do in the mean time.

To end this post on a happier note, here's my happy little guy! 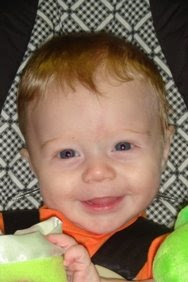 P.S. to lisalou - I think we were at baby group together this morning. I didn't want to say anything, just in case it wasn't you, but I'm sure it was as Ruby is pretty unmistakable! She's even more of a darling in real life!
Posted by hammygirl at 2.10.08